How can you know if your soil is healthy? Isn’t soil just something that holds up plants and more, and that it’s OK if it’s not polluted? Actually, soil health is a combination of good physical strength (aggregate stability), good arrangement of the soil particles, and provides good nutrition for plants in the right amounts. There are 3 easy ways to look into your soil health without having to be a soil science expert.

Good soil physical strength keeps farm equipment from getting stuck in mud, holds water for plants to help them get through droughts, and doesn’t blow away in the wind or move when water runs over it. When the soil particles are “glued” together like coarse bread crumbs they allow rain to soak into the ground easily without washing soil away, and they help drain ponded water away from growing plants.

If they are more like cocoa powder or dust they don’t drain well, and plants can die in ponded water. Healthy soil with good soil particles also holds onto plant food like nitrogen and phosphorus without leaking it all away or carrying it away if the soil particles move with water.

Here are 3 ways you can give your soil a health check-up!

Video begins with showing jars with plastic netting held on with rubber bands, dished down into the top of the jar filled with water to the middle of the threads.

Soils shown are dry, intact clods collected from (L-R) under grass/undisturbed vegetation, middle of the best part of the field, and near a heavy traffic area on an end row.

Clods dropped in water demonstrate aggregate stability, or in the case of the clod that dissolves the loss of stability due to tillage. Despite the “bead on a string” appearance of the particle of soil on a root on the first clod, the stability of the soil is due to benefits of the root exudates (what roots leak or give to microbes) that help “glue” the soil particles together (not just the presence of that root). The field sample in the middle shows some “slaking” due to being pulverized by tillage and lack of root “glues” to hold the soil together.

This version of the slake test is non-narrated. More extensive scientific explanations can be found in many videos on YouTube and other media.

Video begins by showing the equipment of empty plastic peanut butter jars with drilled holes, a plastic container that fits tightly into the top of the peanut butter jar with many holes like a kitchen colander which will make the water distribute across the surface of the soil.

Water is poured into the top containers at the same time. Watch for which soil drains water through easily and which one puddles at the top and drains last into the dish below. The sample with better aggregation drains first showing higher infiltration qualities. The water is held at the perfect tension for plant roots to access it easily. The sample on the right puddles on top as the dust-like soil quickly forms a seal slow to drain – just as it does in tilled fields with little crop diversity – and the beat-up soil is stingy with water in drought conditions.

Video shows the soil infiltration test with water that has drained through a soil with good aggregation (left) and one with very poor aggregation (right). A Hach nitrate test is conducted on the samples. The color of the developed strips shows the better aggregated soil was close to 5 ppm and the poorer soil was more than 50 ppm. Drinking water standard is 10 ppm nitrates to be considered safe for human consumption. Tilled and pulverized soils readily leak nitrates that might be left and unused by crops. 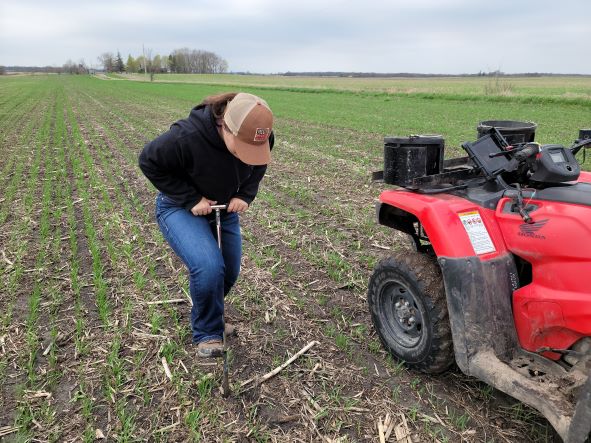